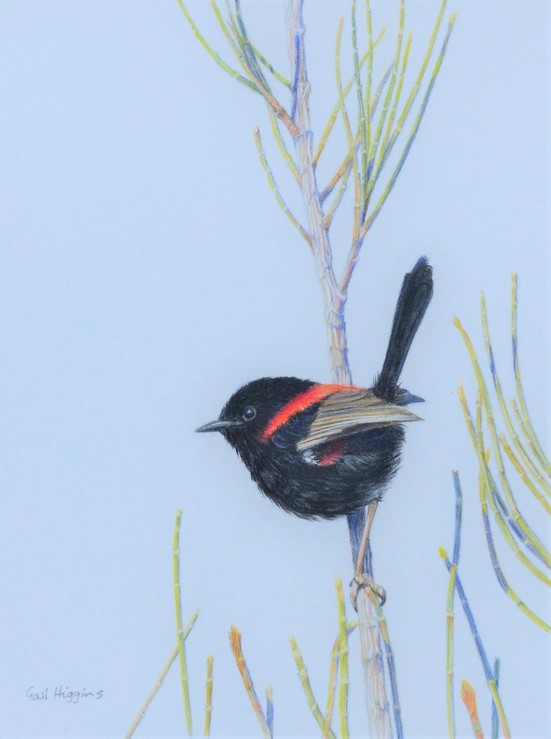 After commencing art lessons in 1995 Gail became increasingly interested in painting Australia’s beautiful native flora and fauna and now devotes more and more of her time to painting birds and the research that involves. A winner of many major awards, including Silver Medalist at the International Wildlife Art Society 2004 exhibition in Bristol, UK, The Pastel Acquisitive Award at Pine Rivers Art Awards 2006, major award winner at Courier Mail Art Show 2005, Gail has also won many major awards at QWASI exhibitions.  She was invited by Australia Zoo to create awareness of native flora and fauna found in the Steve Irwin Wildlife Reserve, Cape York with a solo exhibition on Steve Irwin Day, November 2008. She has had several articles published in Australian Artist and Australian Birdkeeper magazines, the latest being Australian Artist July 2009.  In 2005, with Sandra Temple, she produced Aussie Friends in our own backyard, an art and education book for children, based on images of their wildlife art. Following completion of a Cert IV in Assessment and Workplace Training Gail commenced her own art classes and in 2007 moved into her teaching studio in Wynnum.   She is now sought after to conduct workshops in pastel – her favourite medium because of the vibrancy and the tactile nature of pastels.  In 2006 she was awarded Master Pastellist status with the Pastel Society of Australia.   She was accepted as an exhibiting member of the Queensland Wildlife Artists Society in 1997 and in 2010 was honoured with Life Membership.  She is a member of the Nature in the Raw group of wildlife artists and on the Committee of the Old Schoolhouse Gallery in Cleveland where her work can be found. She is motivated by the belief that wildlife art is not only about the art, but also about the environment in which we live — wildlife artists can do much to call attention to the plight of our beautiful and disappearing wildlife through artistic endeavour. Website: www.gailhiggins.com.au

“Gail has been a finalist in the Holmes Prize for Australian Bird Art every year since its inception in 2015.  This competition is limited to 35 finalists only and attracts entries from Australia’s best bird artists.  Last year she was awarded one of the runner-up awards for excellence. “